Rights Of Parentsn In Islam

Rights of Parents (and Duties of children)

It is clear that after Allah parents are the persons who give us innumerable favors. They provide protection, food and clothing to the newly born. The mother sacrifices her comforts and sleep to provide comfort to her children. The father works hard to provide for their physical, educational and psychological (and spiritual) needs. It is a matter of common courtesy that if a person does you some favor you feel obliged to him. Verbally you say ‘thank you’ to him. You try to repay and compensate him for his gifts and favors. You feel a sense of gratitude towards him. So it is with Allah and with parents. Allah’s favors cannot be counted or repaid except by thanking Him and obeying His orders. After Allah our parents deserve our thanks and obedience for the favors they had done us. That’s why Quran lays stress on feeling grateful to parents, and doing good to them. “And your Lord has ordained that you shall worship none save Him and shall do your parents a good turn.” What does a ‘good turn’ mean? It includes obeying them, speaking softly, avoiding harsh words or harsh tone, giving them company when they are lonely, caring for their physical and psychological needs (especially in their old age), and praying to Allah that He may bless them and have mercy on them.

As between parents the mother has more rights than the father. The reason is apparent. Mother has borne the child’s burden during pregnancy, has undergone birth pains in delivering the baby, has sacrificed her own comforts to provide comfort to her children, has looked after them and felt worried for their well-being. That is why mother deserves our good treatment more than the father. A Tradition of the Prophet (PBUH) tells us that a Companion asked the Prophet, “ Who deserves my good treatment most?” “Your mother”, said the Prophet. “Who next?” “Your mother”. “Who next?” “Your mother”. “Who after that?” “Your father”. This means that the mother deserves three times more good treatment from her children than the father deserves. Another Tradition wants us to extend kind treatment to close relations on the mother’s side also (even to her friends). A famous Hadith (Tradition) says, “Paradise lies under the feet of the mother”. This means doing good to our mother lead us to Paradise. 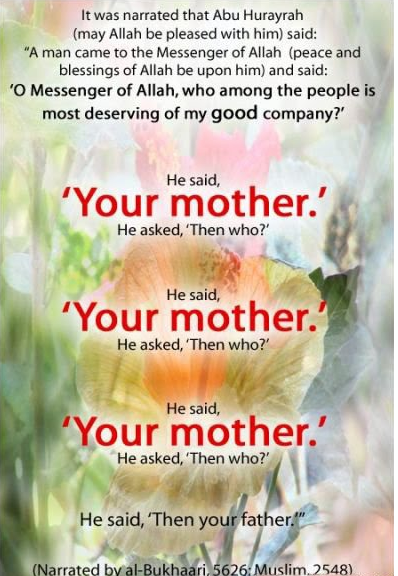 As to the reward for doing good to our parents a Hadith mentions the following story: “Three persons of ancient days were once travelling in a mountaneous region. The rain, thunder and lightning made them take refuge in a cave. Mudslide made a stone block the opening to the cave. The persons were entrapped inside. When the storm stopped they tried to push back the heavy stone to get out of the cave but they could not. They wondered ‘what to do now’. At last seeing that their joint efforts also cannot move the stone they decided to pray to Allah sincerely. One of them suggested, ‘each one of us should relate one good thing he has done in his life and beg Allah to move the stone. One said, “One night my old mother asked me to bring a cup of milk for her. During the time I milched the goat and brought it to her she had gone to sleep. I did not think it proper to disturb her. So I stood by her bedside for the whole night till she got up in the morning and then I offered her the cup of milk. O God, if this act of mine was approved by You please shift this stone.” The stone slipped a little but not enough to let them get out. Similarly, the second and the third man mentioned an act of goodness and prayed to God to shift the stone. The stone slipped down and the entry to the cave opened up. So the men got out. This story shows how service to one’s parents leads to blessings from God and rescue from troubles. Now let us summarize the Rights of Parents (Duties of children):

(1) Right to be respected and obeyed:

Parents have a right to be respected and obeyed by children. All parents are well wishers of children. They issue orders and instructions that are in the best interest of children (though children might think ottherwise). So it is the duty of children to obey their orders and act accordingly. Some children listen to parental orders but do not act upon these or show laziness in carrying out these orders. This causes annoyance to parents. Children should remember that annoying one’s parents can lead to God’s wrath.

(2) Right to scold and rebuke:

It is instinctive obligation of parents to protect their children from physical and moral harm. If a small child puts its hand in fire it is natural urge for you to push the child back, even if the child does not want. It is in child’s interest. So it is with parents. They are duty bound to protect their children in every way, physical, intellectual, moral. If the children have a temptation to do an act that is not in their long-term interest it is the duty of the parents to keep them back from that act or behavior. To this end they may resort to advice, rebuke, scolding, even hitting them. Good children should take all this ‘harshness’ in their own interest. If parents scold them they should bear it calmly. No rude replies, no arguing, no explanations, no comments unless asked for. Parental advice should be listened to and acted upon, even if against children’s own wishes.

Parents have looked after the children for decades. So it is the duty of grown-up children to repay them by way of caring for them and looking to their physical and financial needs. A Quranic verse says: “People ask you (O Prophet) how should they spend. Say, ‘whatever you spend should be spent on Allah (in good cause), on parents, near relatives, on orphans, destitutes and travelers (who fall short of money in foreign lands)”.

As parents grow old their energies also decline. So it is the duty of children to help their parents in any household chore in which they can help. Sons can help in lifting heavy things, cleaning home, arranging things etc. Daughters can help in mother’s household work—cooking, washing, cleaning, serving food etc. With good children such help should come automatically, not when asked for. Whenever you see your mother or father doing something extend a helping hand to her/him without their asking. This is what Islam expects from children.

Quran urges children to be soft-spoken towards parents and show respect and kindness in their behavior towards parents.
Unforunate as it is, the Western societies have forgotten these lessons. Young children are rude towards parents and show disobedience. As the parents grow old they drive them out from their homes and put them in “Senior Citizens Homes”. Grown up children cannot spare time to attend to the needs of old parents. The busy Western life has led to a break-up of the family unit (so much upheld in Islam). As Muslims we expect our children to adhere to Islamic values and show respect, obedience, kindness, leniency and care towards parents, especially in their old age. Children must not forget the favors and sacrifices of their parents. As good mannered persons they must feel and remain obliged towards parents and try to repay them by kind words and deeds, even with money and material needs. These are the Rights of Parents due from their children (or the Duties of Children towards parents). These Rights and obligations are not found in Islam only. Such values are to be found in all true religions. Quran mentions Hazrat Yahya (John the Baptist) as “kind towards his parents, not tough and disobedient”. Similarly Hazrat Isa (Jesus) is quoted saying to his people, “God made me kind towards my mother (Mary) and did not make me tough and disobedient”. Hazrat Yousuf (Joseph), as a royal Minister in Egypt, called his old, poor parents from their far off home and offered them seats on a high platform (he did not feel shy of behaving in a kind manner to poor parents in the presence of his officials). 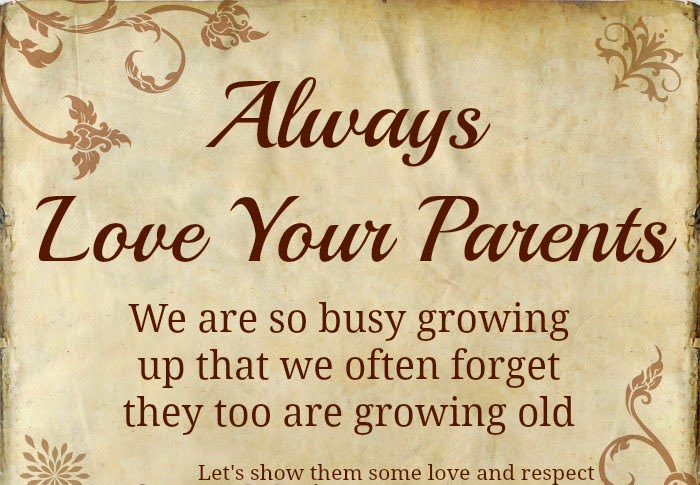 May Allah bless us all.